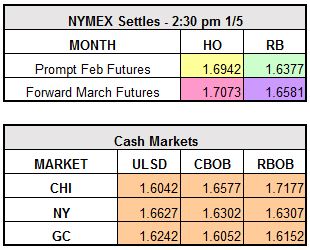 As we near the end of the week, apparently oil traders can’t make up their minds about how to position themselves for the weekend. The WTI February contract was trading up $0.56 early this morning at $54.32/bbl on the heels of the story that Saudi Arabia has indeed cut January production by 486,000 barrels per day. However, it sold off after 10 a.m. to a low of $53.32. Then, it recovered and is currently trading up $0.35 at $54.11.

This volatility is something to expect this month with reports of OPEC’s production cut performance and also the inauguration of President-elect Donald Trump. I know what you’re asking yourself – why would the inauguration of our president affect the oil market? Conventional wisdom would indicate it has no correlation, however, many market analysts are speculating that the stock market could see a correction of some sort from the “Trump rally” we’ve seen. If the stock market would sell off after his inauguration, oil may sell off as well as we struggle to exceed $55/bbl.