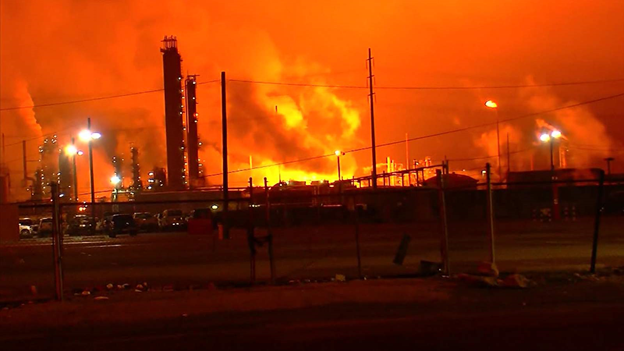 Last night in Baton Rouge, the ExxonMobil refinery caught fire and lit the night sky.  It still remains unclear how this blaze started, but the AP reported, “the fire erupted at the facility in Baton Rouge around 11:30 p.m. Tuesday, Baton Rouge Fire Department spokesman Curt Monte told news outlets. No injuries were reported and the fire was contained to the location where it started, Monte said.”  This refinery is  responsible for output as high as 502,500 barrels per day NBC News reports.  According to eia.gov, “the ExxonMobil plant is the 5th largest in the country and 2nd largest in the state of Louisiana, only behind the Marathon refinery in Garyville capable of producing 564,000 bpd.”

Historically, fires like this need to burn out on their own and fire crews monitor for safety concerns.  While Exxon assesses the damage, they are hopeful that their crude producing units will be up and running as early as Friday.  As this situation develops, media outlets will continue to provide coverage.