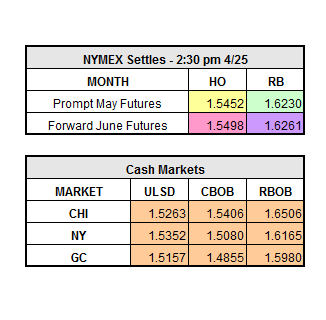 Yesterday the market was off all day and then had a small rally at close.  June WTI closed up $0.33 to $49.56/bbl, May HO closed up $0.0025 to $1.5452/gal, and May RBOB finished up $0.0016 to $1.6230/gal.  The market was off last night and continues to trade down this morning due to the bearish API statistics released last night.  The API stats showed a build in crude inventories of 897,000 barrels, a surprising statistic because expectations were a 1.7 million barrel draw.  The gasoline build of 4.4 million barrels was an even bigger surprise, since a 1 million barrel draw was expected.  Distillates drew 36,000 barrels, which was a bit smaller than what was expected.

The concern is that the supply glut continues even after the OPEC output cuts since the beginning of the year. The next piece of news is whether or not OPEC agrees to continue cuts into the second half of the year. The downward trend continues for refined products; market closes below the following support levels could mean even further weakness: WTI 48.91, HO 1.5336, and RBOB 1.6007.