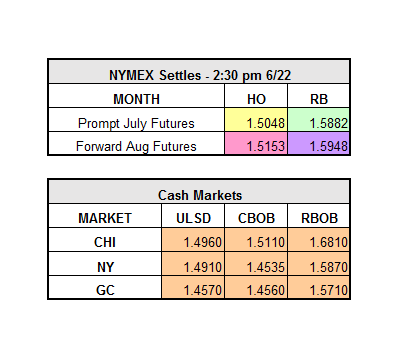 For many, Tuesday’s API report came as a surprise when the U.S. crude inventories showed a draw of 5.2 million barrels. However, the DOEs released yesterday morning tamed that bullish statistic with much weaker draws across the board. On the API report, gasoline and diesel fell 1.5 and 1.7 million barrels, respectively. The DOEs actually had a small build on products, with gasoline building 627,000 gallons and diesel building 257,000 gallons. For crude, the DOEs did show a draw of 917,000 barrels, nowhere near the exaggerated levels of the APIs. It was the fifth consecutive week of a drop off in crude inventories.

The market started off strong yesterday morning, but flipped back with the release of the DOEs. Today, we are seeing the same reaction. This volatility today is due to the Brexit, which is the decision on whether Britain stayrs or leaves the European Union. Voters are heading to the polling stations today, and it is crunch time. According to a Daily Telegraph news report, “The future of Britain’s relationship with the European Union will not be known until at least 7 a.m. on Friday.” That’s 7:00 a.m. GMT. Most of us in the States should be sleeping at that time so be prepared to see a volatile market tomorrow.

The economy in Europe has struggled for years and the fear is if England leaves, it will place a constraint on oil demand throughout Europe. This is the biggest sociopolitical news story since the crude freeze, which turned out to be overrated.