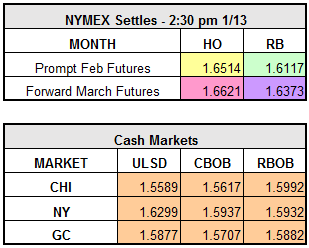 The third Monday in January is the day in which we celebrate the life and achievements of the man whose activism in the Civil Rights Movement successfully changed both federal and state racial discrimination laws. As a reminder, because Martin Luther King Day is a federal holiday, there will be no NYMEX trading, no market settle, and no pricing (PLATTS, ARGUS, etc…).

Like we mentioned at length last week, all eyes are on production cuts and whether those that have agreed to do so actually will. Although no data has yet to be compiled regarding countries’ production cuts and their implied compliance thus far, both Saudi Arabia and Russia have stated they have cut their production levels even par with, or even more so than, their originally agreed upon cut. However, Saudi Arabian Energy Minister Khalid al-Falih expressed his opinion that OPEC and non-OPEC producers will most likely only cut oil output for six months. After that, the high levels of crude output seen last year could come back again. This, coupled with the fact that U.S. production has seen a steady rise in their oil production, is putting a significant amount of downward pressure on oil prices as we speak. WTI crude closed down last Friday and was the first weekly loss in nearly a month.

Although OPEC and non-OPEC members agreed to cut 1.2 million bbls/day of production, the increase in output from Nigeria, Libya, Kuwait, Iraq, and the U.S. may offset that cut. Analysts at Goldman Sachs believe that year-on-year U.S. oil production is set to rise by 235,000 bpd in 2017. Currently, U.S. oil output is nearing 8.95 million bpd, which is nearing the 2014 levels which prompted the global over production supply-glut. The Baker Hughes oil rig count report did show the first decline in the number of rigs, -7, last week for the first time in 11 weeks, however, the total number of rigs is at 522 versus 515 a year ago and the number of rigs is up 200 from the low in May.