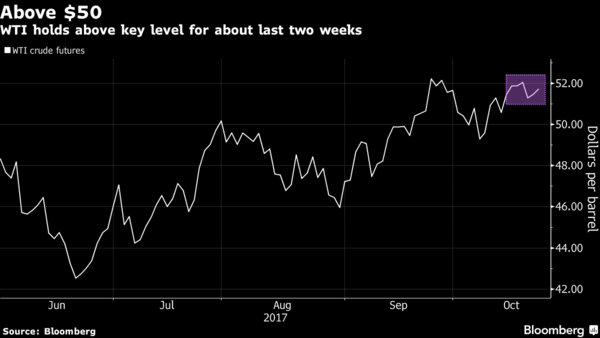 We start out this week with an update in the Middle East. Currently volume out of the northern region of Iraq is beginning to normalize after tensions arose, yet again, between the recently voted independent Kurds and the Iraqi forces.  The oil field that the Iraqi forces had to stabilize in the Kurdish Barsa region was producing close to 600,000 bpd.  Currently, they have been able to get roughly 255,000 bpd of that production up and running.  This figure is up 55,000 bpd higher than they were able to produce in that region last week when tensions had originally began to erupt.  In addition to this, the southern Iraqi oil fields have been especially busy making up for lost production in the north.  The southern oil fields have been working overtime and producing nearly 200,000 bpd more than their usual production output to compensate for lost barrels in the northern region of the country.  From OPEC’s perspective though this production drop off from Iraq is welcomed to a certain degree, as Iraq has been historically one of the least disciplined OPEC members since production cuts began.

Speaking of OPEC, more verbiage is coming out about extending the production cuts through 2018. The Saudi Oil Minister, Khalid al-Falih, is confident in compliance but acknowledges there is still work to be done and was reported by Reuters as saying “compliance within the group of 24 nations taking part in the cutbacks deal exceeds 100 percent.”  Also on Saturday another OPEC piece of propaganda was reported that between the OPEC and Non-OPEC nations complying with the cuts they are seeing a level of roughly 120% compliance, which would be the highest to date since January when the cuts began.  News of extending the cuts through 2018 was also backed by Russian President, Vladimir Putin and should be reiterated in the upcoming OPEC meeting in November, when all 24 OPEC and Non-OPEC members are scheduled to meet.

As for the U.S. and what is going on here on the home front, we have seen a descent in U.S. oil rigs of 7, taking the total oil rig count to 736. Natural gas U.S. rig counts dropped by 8 bringing the total to 177.  These are the lowest levels we have seen in rig counts since June.  We are not seeing very much concern regarding these rig count numbers though.  Why is that?  Well when you look at the hurricane season that we have had, many speculate that the multiple hurricane disruptions were key deterrents for drillers to bring on new rigs.  But as we approach the final month of Hurricane season, and colder weather is on the horizon, we could be seeing a calm before the storm in the U.S. rig count and U.S. production.  With colder weather on the way and prices looking to be profitable for drillers, get ready for a potential surge in activity on the horizon.  As of right now, the U.S. seems to have depleted some of the higher inventory levels of natural gas and we could be actually looking at a potential deficit when compared to the five year average.  This combined with the U.S. becoming an exporter of LNG and coal powered plants potentially being transformed into natural gas powered plants, again….this could be the calm before the storm when it comes to an uptick in U.S. natural gas drilling and production.  Stay tuned.