The market is mixed this morning as today’s DOE stats get digested on the heels of yesterday’s API report.  Currently, heating oil is up approximately $0.0050/gallon while RBOB is in the red, down over $0.01/gallon.  Yesterday saw crude settle up $0.79 to close at $51.03 per barrel while heating oil and RBOB also both settled higher closing at $1.5923 and $1.7217, respectively.  Yesterday’s bump up was attributed to the expected inventory draws which were reinforced by the API data, as well as increasing demand heading into driving season supported by higher U.S. refinery throughput numbers.  That report also showed a decrease in crude imports of approximately 500,000 bbl last week.  Today’s DOE stats, which are much more bearish, showed crude building by 1 million barrels, with distillates down 500,000 barrels and RBOB down 600,000 barrels.

Over the last few weeks, oil prices have risen on the possibility of OPEC and Russia extending their six-month production cut agreement for another six months through the rest of 2017.  The group will meet to decide on May 25th.  Of course, there are doubts on whether the fundamentals in the oil market are strong enough overall to support a sustained recovery.  “The fragile sentiment which resulted in a sharp correction during March is unlikely to go away any time soon.  OPEC is potentially being forced to extend current production cuts beyond six months to achieve its goal of balancing the market,” said one commodity strategist with Saxo Bank.  He went on to say that “there have been signs of frustration from Saudi Arabia related to slow compliance from Russia and Iraq.  The question remains how a deal would survive for a full 12 months given the signs of unease.”

Newsworthy items to keep a close eye on are heightened U.S. – North Korean tensions, the possibility of additional interest rate increases later this year and the continued increase of domestic shale production adding to the supply side of the fuel market. 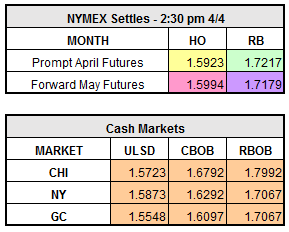