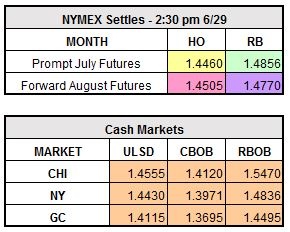 The oil patch traded moderately higher heading into the weekend before the holiday on Tuesday as we close out the quarter. This marks the 7th straight day of gains as it appears hedge funds and other bear market naysayers are putting long positions back onto the books. A flurry of bullish news has hit the headlines in the past few days, but we’ll have to see if the rally continues into next week or if this is just a dead cat bounce.

August WTI trades higher today on light volume by $0.35 to $45.28/barrel as it has bounced off lows around the $42 mark last week due to the aforementioned bullish news. CNBC reported yesterday that about 6 million barrels of crude sit in floating storage in the North Sea compared to about 9 million barrels last week. This decrease in supply could be producers reacting to the low levels we’ve seen on Brent crude prices. Let’s not forget that U.S. production declined by 100,000 barrels per day last week. We’ll see this afternoon if the Baker Hughes rig count follows suit and reports rigs coming offline. On the demand side, Japanese and South Korean crude orders are expected to increase due to low prices and them preparing for the high demand winter season. Winter is coming.

These bullish headlines are fighting the surprising story as of late which is the boom in Libyan oil production. Libya is now producing just over 1 million barrels per day (it is exempt from the OPEC production cuts). This has been a catalyst for the price decline in the past few months, but we should be weary how long this increase in production can last. Libya is notorious for in-fighting which can disrupt its oil production. Also, OPEC has been quiet as of late, it would not be surprising if it produced headlines that it would start considering asking Libya to curtail production quotas to springboard oil prices even further. Some analysts think we’re just experiencing a technical bounce off lows, but we’ll have to see if this rally continues and we push past $46 which could make for a sustainable rally.