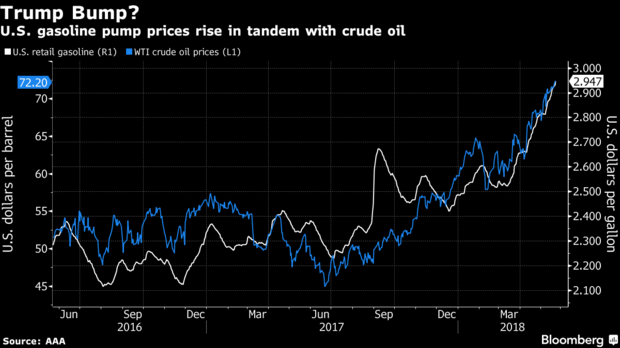 Thursday marked the largest drop in the oil market since May 8th based on OPEC’s most recent rhetoric. After the United States had withdrew from the Iranian Nuclear Deal everyone has seen prices go up at the pumps and the volatility in the market is as prevalent as ever. So what has finally stalled this rallying market? The answer is OPEC, primarily Russia and the Saudi’s, have begun putting it out there that they are considering increasing production to compensate for Iranian and Venezuelan crude potentially leaving the mainstream market. The current stance the U.S. is taking though seems to point at applying severe sanctions on both oil producers within the not so distant future.

“This discussion about possible OPEC supply increases after the June meeting has put a brake on the oil price for the time being, so $80 is a big hurdle to overcome. If prices get above there, that will further intensify and increase the likelihood that OPEC will do something. It’s going to be very difficult to overcome this level on a sustainable basis before the OPEC meeting.” – Commerzbank strategist Carsten Fritsch

This is the first time, since the decision to cut 1.8 million barrels out of the market that OPEC has begun to sing a different tune. The Energy Minister of Russia weighed in as well on the topic and hinted that production cuts could be “softly” alleviated given the market shows the progress of rebalancing come June 22nd.  When you match this OPEC talk with the fact that we saw a surprise build in our crude inventories this week, of 5.8 million barrels, it is clear as to why the oil market bears came out of their hibernation. Another build that occurred this week in the stats was in the gasoline sector, 1.9 million barrels, and this comes at a rather strange time given consumption should be sky rocketing leading up to and through the Memorial Day weekend. Given this will be marking the start of summer driving season though these inventory builds should be taking a good hit in the upcoming days.