Baker Hughes released the most recent rig count this week, and no surprise, it’s continuing to increase. With OPEC production cut compliance at an estimated 90% and increasing price, shale producers are drilling at a rapid pace.  Over the last two weeks, the U.S. shale rig count has increased by 15 and reached the highest amount since October 2015.  The total number of shale rigs is currently at 602 and this is the sixth straight week that the rig count has gone up.  How does this compare to last year?  This time last year we had 202 fewer active rigs in the U.S.  Given the most recent drop in natural gas prices, though, the gas rig total has decreased by only two rigs to 151 total.  The oil industry is watching closely as the major OPEC producers are cutting production and continuing to say they will have more cuts in the future. U.S. production grows stronger day-by–day, riding the coat tails of oil pricing. 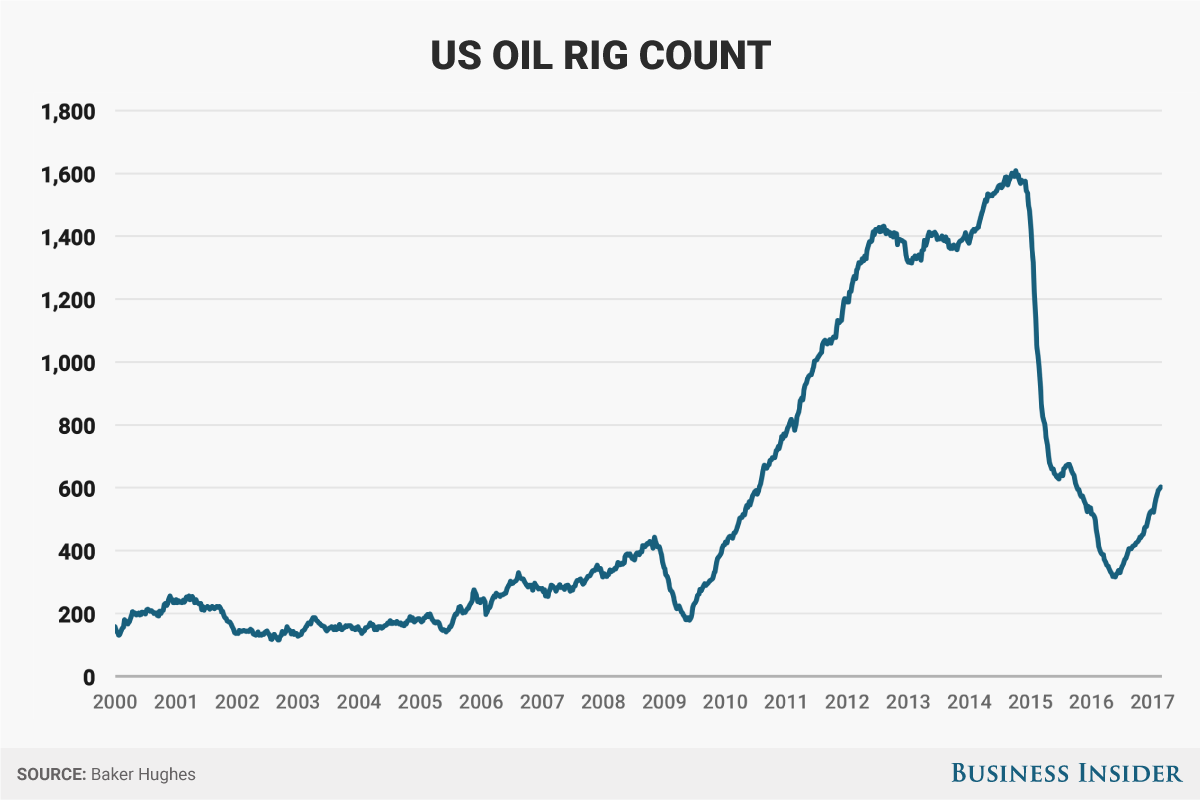 As we discussed last week in this space, the EIA projected the U.S. to produce 9 million barrels per day this year, and as of last week production has begun to surpass this figure. Business Insider’s Akin Oyedele says, “After the rig-count release, West Texas Intermediate crude futures for April delivery were down by 0.8% to $54.02 per barrel, but on track for a weekly gain. Prices rallied on Tuesday after OPEC said it was sticking to the deal and was determined to achieve a higher level of compliance than agreed.”  Along with this, Reuters reports that the U.S. Commodity Futures Trading Commission, or CFTC, has raised its U.S. crude future and option positions to the highest on record.  Reuters estimates that U.S. investors currently hold nearly 1 billion barrels of oil, or a value of $52 billion, within their 951,312 lots in the U.S.  These figures are based off of current Brent and WTI benchmark pricing.

With all this optimism there is also a flip side to the coin. What if OPEC compliance drops?  Or even, what if OPEC decides to only hold to 6 months of cuts rather than a full year?  This could be a very delicate situation if either of these scenarios comes to fruition.  Stephen Brennock from PVM said, “With speculators increasing their bullish bets on U.S. crude to an all-time high, the risk of disappointment and subsequent downward spiral in prices has never been greater.”

More information regarding current rig levels can be found at http://www.wtrg.com/rotaryrigs.html.