Earlier today a report said Saudi Arabia threatened to raise its production from 11MMbpd to 12MMbpd and to even skip the OPEC meeting November 30th in an effort to strong-arm other OPEC members into a comprehensive production cut. This comes after a Reuters survey estimates that OPEC’s October production rose to 33.8MMbpd, a record high. As a result, WTI December crude prices tumbled $1.09/bbl to $43.57.

However, within an hour of that information being reported, OPEC Secretary General Mohammed Barkindo said that report was false. Crude prices quickly jumped about $1/bbl to trade approximately flat on the day. The OPEC jawboning will only continue as we inch closer to the meeting later this month, adding to the price volatility that we’ve seen.

December WTI traded as high as $52.22 this month, but broke key $45 support yesterday as traders continue to doubt any hope for an OPEC production cut. U.S. crude inventories increased by a record 14.4MMbs last week, further adding to the bearish sentiment. The next support level is $42.72; we are trading $44.01 at writing. An OPEC no decision could easily see the price drop to $40 or lower. 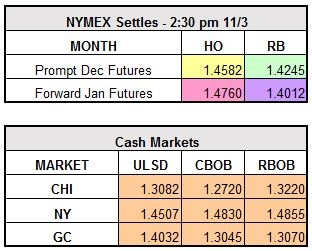