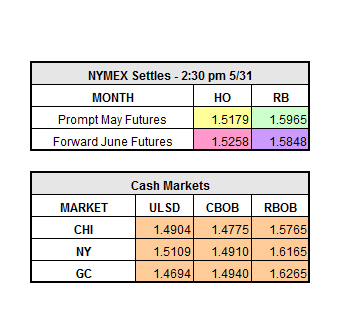 DOEs came out at 11 a.m. ET reporting a draw in crude of 6.4 million bbl, 747,000 bbl of that in Cushing Oklahoma. Gasoline drew 2.8 million bbl and distillate had a small build of 394,000 bbl. This is the 8th straight drop in crude inventories and crude runs at refineries have been up last 3 weeks.  Higher crude runs mean drawdown of inventories but should indicate a corresponding increase in products gasoline and diesel.  The increase in runs is a function of refinery turnarounds/repairs being completed prior to “driving season” along with decent crack values for refiners.  Looking at estimated demand numbers we see gasoline demand has been increasing over last few weeks (+4% vs. last year at this time) which is helping to offset the increased crude runs.  Diesel demand is 5% over last year but has not seen the robust increase over the last few weeks.

Today officially kicks off hurricane season, which may be interesting after the 2016 season being that it was recorded as the 2nd longest season since 1951.  There were 15 tropical storms, seven hurricanes, and three intense hurricanes.  There are 11-17 named storms expected, 4-5 of which are predicted to hit the United States, 5-9 hurricanes, and 2-4 major storms.