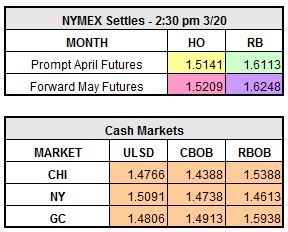 Does anyone have some room for crude oil? Oil prices reversed to trade lower mid-morning as the major U.S. stock market indexes sharply sold off despite a weaker U.S. dollar. But a larger component could be attributed to the swelling U.S. crude inventories and concern that we’re running out of available storage capacity.

It looked like the oil bulls were in control early this morning as crude traded as high as $48.73, up $0.51/barrel. However, it began trading lower when the major U.S. stock market averages started trading much lower on the day. The Dow Jones Industrial Average traded down 200 points at one point, dragged down by the financial sector. This sell-off encourage crude oil to follow suit, presently trading down $0.54/barrel at $47.68 on the April WTI contract.

This price action is surprising given that the dollar index is trading lower yet again today at 99.565. On the fundamental side of things, we have begun to get oil inventory data expectations for tomorrow, which is pressuring prices. Reuters’ poll indicates that U.S. crude oil stocks built by 2.6 million barrels last week. Yes that is bearish news, but the more troubling build is the one that Genscape reported yesterday, a 1.5 million barrel build in Cushing, Oklahoma. This build would take the country’s largest storage hub to 91.3% of capacity, less than 1 million barrels from its all-time high set last year.

OPEC mentioned yesterday that members increasingly favor a production cut beyond the current June end date, but non-members, most notably Russia, need to comply. OPEC can gossip all it wants with this bullish rhetoric, but traders are getting frightened about possibly not being able to store their oil here in the U.S. Keep in mind, there is still an extraordinary amount of net longs in the market that could decide to liquidate if fears arise that we will indeed run out of storage. Translation: we’re facing a potential strong sell-off.