Big changes could be coming for truckers across Pennsylvania in February of 2022. These changes would be positive and could save truckers 33% in Pennsylvania taxes. Under the current tax plan, truck drivers pay 73 cents a gallon on diesel tax which equals to around 12 cents a mile in state taxes. The new plan would switch from paying a diesel tax to a miles-driven fee of 8.1 cents. This would be a 33% decrease in cost to truck drivers on fuel.

According to Transport Topics, based on 13,000 miles driven in a year and an average of 6 miles per gallon, the cost would drop to $1,053 from $1,582 for truck drivers. Rebecca Oyler, Pennsylvania Motor Truck Association CEO, says “She would be surprised if the fuel tax revenue of about 38% Pennsylvania receives comes down too much.” She also said “It would be a nice surprise if changing the funding system helped the industry by substantially reducing that percentage. We know trucks have a great impact on the condition of roads than passenger vehicles, so that’s why they pay more. That 38% is a huge amount of the overall money, and I would be surprised to see that come down much.”

This miles-driven fee might not be for truckers only. Both fuel efficient vehicles and gas-guzzlers would cost the same to fuel in gas taxes. Driving a fuel-efficient vehicle would no longer have a gasoline tax advantage. For example, for a driver with a vehicle that can go 40 mpg, the gasoline tax amounts to $190 a year currently. Under the miles-driven fee, that driver also would pay $1,053 according to Transport Topics.

Of course, nothing is set in stone. This “plan” was proposed quickly to meet Governor Wolf’s deadline of August 1st. Wolf’s administration was recommended to spend the rest of the year improving proposals, so they are ready when the governor announces the budget early next year. 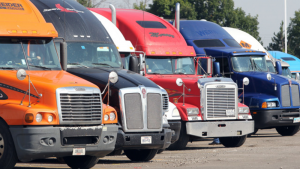