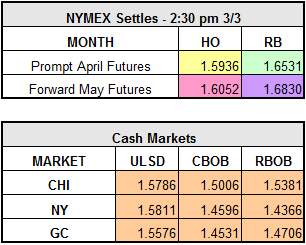 The oil market is looking for firm direction this morning as it digests the usual stories, numbers and rumors.  As has been the focus over the past few months this list of topics include OPEC/non-OPEC compliance versus U.S. production, Trump administration news and a possible Federal Reserve interest rate increase later this month.

Although OPEC compliance increased from 86% in January to 94% in February, the numbers are not as strong when the two exempted countries Libya and Nigeria are included.  When their production is factored into the equation, estimates of compliance rates drop to 77% according to Reuters and 80% according to Bloomberg.  While the OPEC numbers are somewhat known, the Russian production cuts or lack of production cuts remains a question mark.  Russian production failed to decrease from January to February leaving many to wonder whether Russia will live up to its eventual expected production decrease of 300,000 barrels per day.  With Saudi Arabia increasing its production cuts to offset others’ shortfalls, the question of extending the agreement beyond six months is becoming a growing concern.  As many analysts have summarized, for OPEC to achieve its goal of lessening global oil inventories, compliance will need to improve and the deal will need to be extended beyond six months in order to see significant results.  Of course, adding to the supply side of the equation is U.S. production.  With prices somewhat stuck in a narrow range, rig counts have been creeping higher.  As was reported last week, U.S. rigs increased by seven last week to reach 609 total which is a level that hasn’t been seen the fourth quarter of 2015.  As a result of increased rig activity, the EIA is projecting U.S. crude production in March to increase to 8.91 million barrels per day, which is an increase of 90,000 barrels per day over the February levels.

Looking ahead, continued talk of a possible interest rate increase later this month could put pressure on commodities due to a stronger dollar resulting from the rumored rate hike.  In addition, stay tuned for Trump administration headlines and mid-week stats.

As of mid-day both heating oil and gas are up ~ $.0100 while crude is trading down slightly.