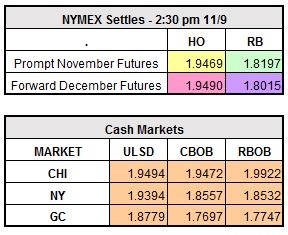 November is shaping up to be a cold month. Today was the coldest we’ve seen thus far this winter, and it looks like a second punch of brisk cold and potentially stormy weather will hit just prior to the Thanksgiving holiday. AccuWeather reports that a displacement of the polar vortex is possible in the Northeast that could be combined with a significant storm. Meteorologist, Paul Pastelok said, “there is the risk for the first major snow fall in the Northeast from Saturday, November 18th, to [Wednesday] November 22nd,” right during one of the most traveled weeks of the year. This may cause a bump in heating oil prices as demand spikes before this burst of cold weather.

Saudi Arabia will be cutting crude exports by 120,000 barrels per day in December Reuters reported. Saudi crude exports to the United States will decline by about 10% during this period compared to the levels we saw in November. This comes three weeks before the OPEC meeting that everyone is looking towards on November 30th. Presently, no OPEC member is saying they aren’t extending production cuts, so a lot of bullish news has been built into crude prices, especially Brent which last traded at $63.69/barrel.

Not only is the supply picture tightening, but the demand has been robust as of late. CNBC noted particularly strong oil demand in Asia. The crude oil tankers holding storage around Singapore and Malaysia have been cut in half since June.

All of this has caused the December WTI oil price to rise to almost a 1 year high at $56.86/barrel, down 31 cents today. The November 30th OPEC meeting will be pivotal to the price direction for the rest of the year, and could push us to the $60/barrel level. However, Morgan Stanley forecasted earlier this week that the end of year target is $56/barrel…meaning that we could be in store for a “buy the rumor sell the fact.” Stay tuned…