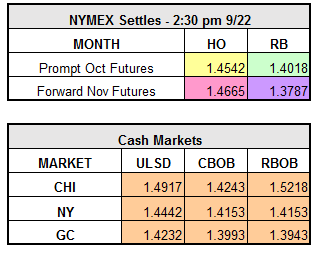 After a week littered with Central Bank headlines across the globe, monetary policy will take a back seat next week to the informal OPEC meeting in Algiers September 26th – September 28th and the first U.S. presidential debate between Hillary Clinton and Donald Trump on Monday.

This week the FED, Bank of Japan, and Russian Central Bank among others, drove bond, commodity, and equity markets higher with their inaction to raise interest rates lowering the value of the dollar index.

Janet Yellen and the FED held off on raising rates, keeping the rate between 0.25 – 0.50%, as expected, but indicated they’re on the path to eventually hiking. It’s not surprising that they kicked the can down the road until after the November election; this may have caused too much volatility for Wall Street to handle.

The Bank of Japan decided to maintain its negative 0.1% interest rate, but took a stance which hasn’t been used in decades: focusing on keeping its 10 year bond yields around zero. In short, the BOJ is buying bonds to suppress borrowing costs which it hopes will encourage investors to borrow money and invest in the Japanese economy.

Russian Central Bank Governor Elvira Nabiullina actually cut Russia’s interest rates by 50 basis points to 10%. Obviously, Russia has quite a high interest rate compared to the U.S., but have cut to induce investment in the Russian economy. The economy is struggling particularly because of low oil prices, especially since it has just overtaken OPEC member Saudi Arabia as the world’s largest oil producer, now producing 11.75 MMbpd.

Speaking of OPEC, the much talked about “informal” meeting begins on Monday in Algiers. News and rumors about the meeting have been compiling for months, with the most recent headline early this morning that Saudi Arabia may cut production if Iran agrees to cap its production. The news catapulted crude prices off the lows this morning as traders look to position themselves for the first leaks of information from the meeting next week. Most analysts are skeptical any reasonable solution will be reached, which could cause WTI crude to test $40 again; it’s trading at $46.21 at this writing.

The other spectacle early next week is the first U.S. Presidential debate between Hillary Clinton and Donald Trump. With Clinton up 3 points in the race at last check, according to Real Clear Politics, the debate is rumored to draw Super-Bowl type ratings as Hillary’s health scare narrowed her lead in the polls. Wall Street will be watching intently to see if Trump can make up ground, which could add to the market volatility we’ve seen in September. The debate will air on most major broadcast networks at 9 p.m. ET on Monday, September 26th.