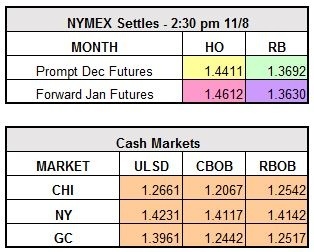 On a historic day for our country, the markets don’t know how to digest the outcome. Dow Jones Industrial Average futures last night were down 800 points at one point; we are now up triple digits. Dec WTI futures were as low as $43.07/bbl in the early morning, but are now trading up at $45.68. Last night’s sell-off came because the market did not anticipate a Trump victory. Now that he’s won, the market is rallying. Traders are saying this type of volatility is worse than Brexit and 9/11. Let’s not forget we have the OPEC meeting at the end of this month, which is not expected to produce a production cut agreement. We also have a FED meeting in December, with the market expecting a hike in interest rates. If these two events don’t go according to plan, fasten your seat belts for more volatility.

With regard to normal Wednesday news, petroleum stats were released today. WTI Dec futures initially fell after the government reported an increase in crude stocks last week of 2.4 MMbs. This was below the API estimate yesterday, which forecasted a build of 4.4 MMbs. Production drastically increased last week, adding an incremental 170,000 bpd of output. Despite the initial sell-off, crude currently trades up $0.69 on the day at $45.68/bbl, seemingly mirroring the rise in stock prices.

For refined products, gasoline stocks drew 2.8 MMbs vs. the 3.6 MMbs draw expectation and distillate drew 1.9 MMbs vs. the 4.3 MMbs expectation. Gasoline currently trades down $0.0065 to $1.3627/gallon, while ULSD trades up $0.005 to $1.4461/gallon. Gasoline appears to be a bit softer because the Colonial pipeline Line 2 shipments restarted on Sunday evening and have now normalized operations. 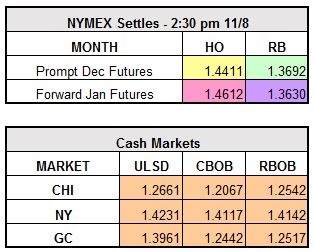