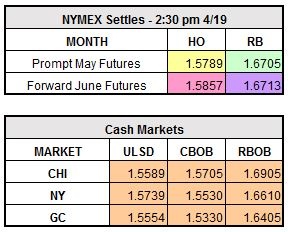 We are trading decisively lower the day after the May WTI contract expired yesterday as the bulls are slashing their positions. The June contract was trading higher than May yesterday, but it wanted to close the gap today and then some. At first, it was gravitating toward the psychological $50 level, but now we’re under it, trading down $1.08 on the day at $49.63/barrel.

Today’s move may be more technical than anything as we approach the much anticipated French election this weekend. Traders around the world are on edge today because the far-left candidate, Jean-Luc Melanchon, seems to be gaining much ground in the recent polls. The New York Times reports that Melanchon is at 19% while the conservative leader, Francois Fillon, has 19.5% share of the vote. A far-left win in the first round, which would move them to the second round of voting, increases the chances of tighter regulations and the very real possibility of a “Frexit.” This would generate a snowball-effect type logic for traders that could be interpreted as the beginning of the end of the Eurozone. Sound scary? That’s why trading houses are bringing in their teams Sunday night to combat light liquidity and possible volatility. Remember Brexit? The same volatility is possible, which could affect oil markets.

Aside from the French election anxiety, oil bulls just appear to be tired as we finish this week. Some analysts believe that, from a technical standpoint, since we broke key support levels this week, we could be headed to $47/barrel.