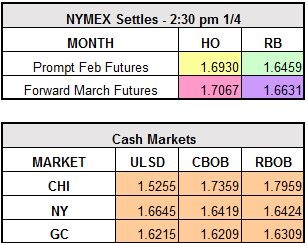 2016 finished with some very promising numbers vs. 2015. In 2016 there was an average daily volume increase year-over-year from 2015.  Oil broker PVM reported, “The annual growth, including both NYMEX and ICE contracts were up 22%; 2.93 million contracts per day, up from 2.39 million lots in 2015.”   On top of that, WTI increased by 170,000 lots, which equated to a 36% jump.  These numbers, on top of the OPEC production cuts proposed (and so far honored), appear to be some of the steady flow of information that could drive the price per barrel up quite a bit.  This would make everyone in the industry quite happy, but how would consumers feel about this in 2017?

As a consumer, there will be an inverse reaction to the above news. As of yesterday Pacific Northwest gas prices increased almost a dime and hit a new 16-month high.  The reasons for this spike include increased exports out of the region, upcoming refinery maintenance and Gulf coast gas premiums (alternate product source point for USWC) beginning to solidify.  The western side of the country is feeling it now, but it will continue to spread across the country and make its way to the East Coast.  The U.S. will be facing an average of $0.36/gallon increase from 2016.  According to GasBuddy’s 2017 Fuel Price Outlook, this will make for an additional $52 billion dollars spent by consumers in 2017. 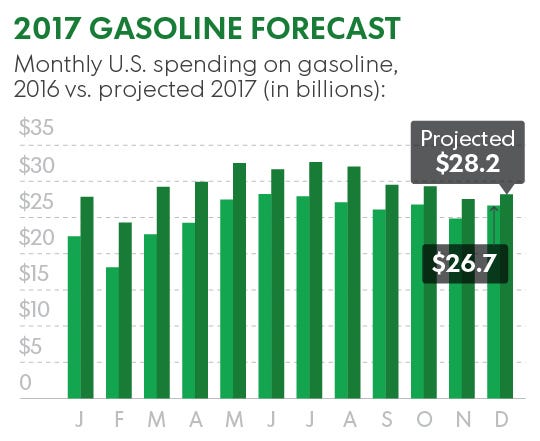 If you live in the heavier populated/higher gas consuming cities like Los Angeles, Chicago, DC or New York, you will more than likely see $3 a gallon sooner rather than later. The major metropolitan cities will see this upsurge first but the rest of the country should not be far behind.  Keep in mind this is contingent on continued cooperation regarding production cuts and increased price per barrel exports from the major oil producers.   One of the key players, Saudi Arabia, has already decreased crude loadings by 7% and increased its Arab Light crude price by $0.60 in February for its Asian customers.