By the end of 2021, TuSimple a San Diego based startup plans to deploy autonomous trucks that drive themselves from pickup to delivery points.  TuSimple, which is a self-driving truck company is developing a technology that allows driving from depot to depot without human intervention, will begin their driverless tests of the technology in Arizona later this year, according to FleetOwner.

Jim Mullen, TuSimple’s chief administrative officer, says “This will be the first time we’ve taken a safety driver out of the truck. It will be on highway and surface streets, hauling actual freight. It is depot-to-depot, from Tucson to Casa Grande, which is 110 miles. We’ll navigate the surface roads that go onto the interstate. We’ve been doing surface road driving for a couple of years now. We do unprotected left-hand turns in town. We go over railroad crossings.” One thing still in the works with the human-less trucks is what will happen when other motorists are not conforming with the rules of the road? Along with how does the truck react to another motorist on the road who isn’t following traffic laws? As for the truck itself, Jeff Mullen explains, their truck does a tremendous job of doing what it’s “supposed to do”, such as following the rules of the road and staying in its lane.

Currently, the driver-less trucks, which do hold a safety driver just in case, are in Phase 1 of testing. Running in Arizona, Texas and New Mexico. Phase 2 will begin by the end of 2021 with trucks running from Dallas to North Carolina and Atlanta. Phase 3 should have the trucks running from coast to coast but refraining from states where they might encounter snow or icy conditions. TuSimple plans to roll out their Level 4 trucks by 2024 which will be human-less across America. 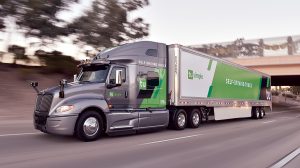