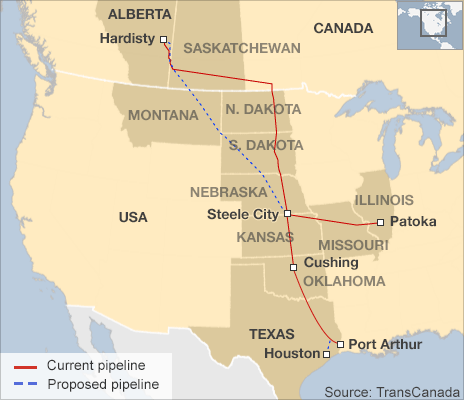 Documents obtained by Canadian media outlet CBC have shown that President-elect Joe Biden will sign an executive order to revoke the permit for the Keystone XL Pipeline on Wednesday, his inauguration day. Although, according to the LA Times, “Biden spokesman Andrew Bates said the transition team had no comment on the pipeline.”  The Keystone XL Pipeline has been a widely controversial issue since its inception and has sparked protests, legal actions, and executive orders from Presidents Obama and Trump.

According to Yahoo news, “The Keystone XL pipeline would carry some 830,000 barrels of heavy crude a day from the fields in Alberta to Nebraska. From there, the oil would travel via existing pipelines to reach refineries around the Gulf of Mexico.” The pipeline had been touted as a partnership between Canada and the United States in hopes to strengthen their bond and reduce the need for crude produced by the OPEC Nations. The news of President-elect Joe Biden’s impending decision to halt construction has sparked concern, “Alberta’s leader, Premier Jason Kenney, said he was “deeply concerned” by the reports of Mr. Biden’s plans and said if the pipeline were cancelled, his government would look at legal action.” The company building the pipeline is equally concerned and has claimed that stopping this project would cause economic hardships further reaching than anyone might anticipate. According to the NY Times, “TC Energy would not be able to employ a majority of the approximately 1,500 unionized construction workers, and approximately 300 administrative, inspection and management personnel it would otherwise employ for pipeline construction in 2020,” the company’s lawyers said. “The loss of so many high-paying jobs, along with the loss of the secondary employment and economic opportunities that construction activities would otherwise create in local communities, would be particularly harmful in the current distressed economy.” Even though there are many on the side that the pipeline is necessary and should be finished, there is an equal amount of opposition.

Native groups and environmentalists are just some of the “labeled” groups opposed to the construction of the pipeline. The New York Times goes on to say, “Opponents of the nearly 1,200-mile pipeline have regarded it as both a contributor to climate change and a symbol of the country’s unwillingness to move away from an oil-based economy.”  President-elect Joe Biden has made it clear that his platform has a green initiative, and he wants to satisfy his commitments to his constituents. While the more pressing issue facing this country is the global pandemic it will be interesting to see if he makes this announcement on his first day.

Keystone pipeline: Biden ‘to cancel it on his first day’ (yahoo.com)