Crude oil got pummeled in early morning trading as comments by both President Trump and the head of Russian oil producer Rosneft may mean darker days ahead for crude prices.

President Trump officially announced yesterday that the U.S. is backing out of the global Paris Climate Agreement. This will cause growing oil glut concerns as the U.S. may lighten oil production regulations, which may ramp up production rates. Additionally on the bearish front, Igor Sechin, head of Russia’s largest oil producer, Rosneft, reiterated that the OPEC and non-OPEC extension of production cuts into March 2018 may not be enough to balance the oil market. Reuters reports that he said “those are hardly systemic measures,” indicating that something more significant needs to be done so OPEC and Russia don’t continue to lose market share to growing U.S. and Canadian oil production. The EIA reported yesterday that U.S. daily oil production rose another 22,000 barrels per day, which now stands at 9.342 million barrels per day.

Given both of these bearish stories, the oil bears took control in early morning trading, pushing the July WTI contract to as low as $46.74/barrel, a daily loss of $1.62/barrel. $47 has been a target technical traders have gravitated towards. If we continue to stick around this level and the bearish headlines persist, $42 may be in the cards this summer. 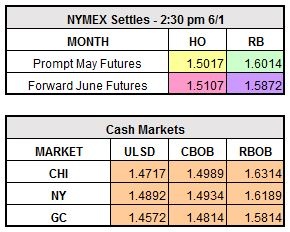