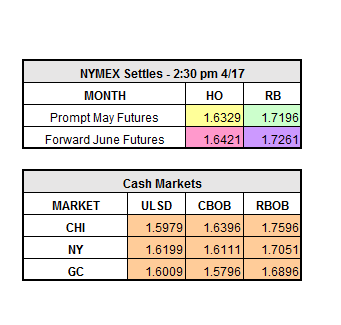 This morning Citigroup Inc. is making a bullish guess for where it thinks prices are headed next,  giving support to the ideology which says crude will be near $65 dollars by Q4. The market settled at an 11-day low for oil prices yesterday, but Citigroup is cautioning that this dip in prices is only temporary.

Argument for prices to rise:

Argument for prices to fall:

While Citigroup believes prices are headed up, it acknowledges this will only be the case if OPEC is successful with extending production cuts, stating that a failure to extend production cuts could send prices “precipitously lower.”

The contrarian view to Citigroup’s would be that production cuts will not be enough to overcome supply levels in the market, especially with the U.S. ramping up production.

Last week, inventory statistics were bullish, however the market was so over-bought that prices ended up going down.  Ahead of the API statistics that will be released tonight, the market is currently down 31 points on distillates, 79 points on RBOB and WTI crude is trading up 3 cents (as of 10:29 a.m. ET).