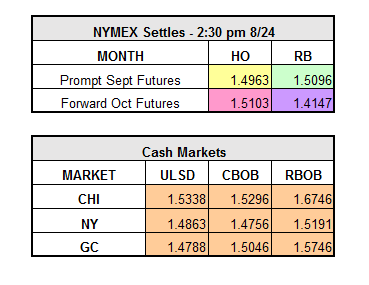 Let’s recap the EIA report from yesterday morning: There was a reported build in crude inventories of 2.5 million barrels, gasoline built slightly by 36,000 barrels, and diesel built 122,000 barrels. The key driver of the build was the U.S. east coast inventory, which grew by 3.1 million barrels. The market was down over a penny a good portion of the morning with the API report Tuesday evening showing stronger builds than the EIA report, but once the EIA was released the market evened out and eventually finished slightly down on diesel by $0.0055 and up $0.0100 on gas.

Today we are seeing a fairly flat market across the board. Gas is down $0.0123, diesel is even to the NYMEX, and crude is up $0.19 to $46.97 as of noon EST. With mainly bearish statistics released over the last two days, the question is: why isn’t the market falling off? There are a couple reasons why the market is remaining stagnant. First, in July Chinese data showed its crude inventories falling by 5.7% to 28.9 million mt (metric ton), reaching the lowest level since mid-2013. Second, refinery runs dropped by 1% last week due to a number of prolonged refinery issues in the Gulf Coast that led to utilization rates decreasing.