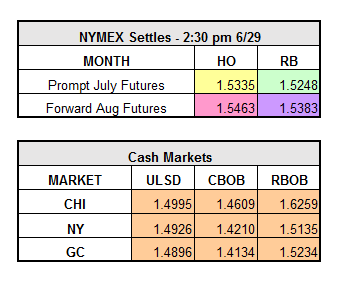 While crude and distillate inventory withdrawals came in unexpectedly high, they were accompanied by substantial builds in gasoline on the EIA report yesterday. Crude stocks fell 4.05 million bbls compared to the 2.37 million bbl estimate, distillates drew 1.8 million bbls against an estimated build of 14,000, and gasoline stocks built by 1.37 million bbls, contending an expected build of only 58,000 bbls. Increased refinery throughput of 1.7%, rising 190,000 bpd, along with a 100,000 bpd drop in demand, could explain such high gains in gasoline stocks. Utilization is now at 93%, the highest since December 2015. Approaching Independence Day weekend, gasoline stocks are 10% above last year’s level.

The Nigerian government and militants are attempting to reach a compromise for a ceasefire, which is putting pressure on the market today. Nigeria has been a catalyst in the recovery of oil prices, currently at the lowest production levels since 1988. A ceasefire would boost production and put further downward pressure on oil prices as output picks up. Earlier this year Goldman Sachs had predicted prices to reach the $50/bbl range in the second half of 2016, however this estimate could prove false if supply disruptions in Nigeria continue to subside.

While the Brexit decision’s potential impact on global energy markets is still a fresh topic, the greater concern seems to be shifting to the dynamics of China crude oil. While Chinese imports appear healthy, rising 7.49 million bpd in the first five months compared to last year, after digging a little deeper this figure may be deceptive. Output in the country as dropped 7.3% in May compared to last year, and production has fallen 170,000 bpd in January-May compared to 2015. While on the surface it may look like Chinese oil demand is on the rise, after further investigation it appears to not be actual growth, but that the country is filling their strategic storage at a rapid pace. It is estimated that about 941,000 bpd went into commercial or strategic storage in the first five months of this year.