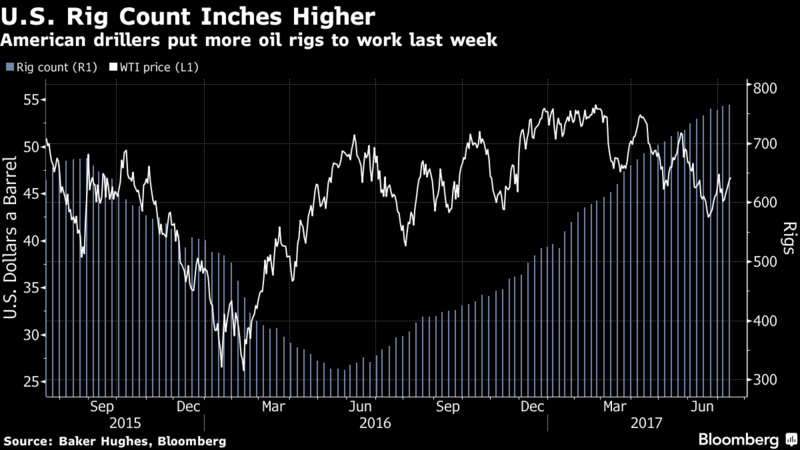 Based off of the past few weeks there seems to be a bit of a plateau in the U.S. drilling exploration. There were only two new rigs that came online this past week and with that the market is seeming to respond as the price per barrel ticks upwards to about $49 a barrel.  Reuters indicated that this could be setting the world’s mind at ease regarding U.S. shale output overshadowing OPEC cuts.  Baker Hughes reports that there are 765 current oil rigs after this past week and that over the past four weeks we have only averaged roughly 5 new rig additions a week.  This would mark the slowest growth in the oil fields since last November.  What are some causes in this slowing of production and exploration in the U.S.?  One of the key contributors is that the cost of drilling in June 2017 was roughly eight percent higher than in November of 2016.  Energy brokerage Powerhouse reports, “The rise in drilling costs has barely started to reverse the previous 34 percent decline reported between March 2014 and November 2016, but it does mark an important turning point in the oilfield services costs cycle.”

One of the key factors going on in the U.S. also is active vs. inactive rigs. Active rigs have more than doubled in a year here in the U.S. and costs have only risen just under 3%.  When discussing the pricing influence in the oil fields, this past year’s activity has been able to reduce idle rigs AND bump up more power to those who control the active rigs operating right now.

When looking at the slowing of the rig count additions and the drastic results of the weekly DOEs, could we finally be seeing some of the bullish news expected from OPEC “rebalancing?” Carsten Fritsch, an analyst at Commerzbank, was quoted on Reuters stating, “The most pronounced inventory reduction in the U.S. in 10 months and the resulting decline in U.S. crude oil stocks to below the 500 million barrel mark in the last reporting week have clearly prompted a shift in sentiment.”  OPEC is still committed to the cuts but given the continued rise in production from two OPEC countries exempt from the cuts, Libya and Nigeria, the results from the cuts are looking less than stellar at the price level.  One of the major things we will see in the upcoming year, given all of this, is the increase of oilfield service costs.

With that anticipation in the market, do not be surprised when the rig counts are not as robust as they have been since November 2016 and more bullish news comes about in order to raise oil prices to subsidize these cost increases. There is a meeting with OPEC and non-OPEC committees in Russia on July 24th to discuss the OPEC cuts and what to do moving forward.  With the expectation that oil demand as a whole will rise through the end of 2017, and especially into 2018, OPEC is speculating that the excess product in the market should begin to take substantial hits and pricing will “rebalance” the way they hoped from the beginning.