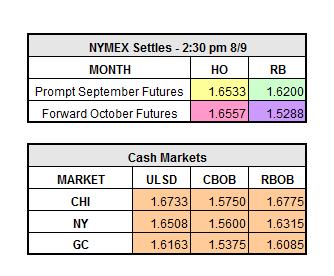 After 6 consecutive weeks of draws in crude inventories, with only one being less than a multimillion draw, the market was in the green early this morning. However, it now has fallen into the red and is steadily losing ground.  U.S. crude inventories fell by 6.5 million barrels last week due to increased demand and a decrease on imports by almost 500,000 b/d.  Inventories are currently at their lowest levels they have been since October 21st, 2016.  Down 11.3% from their highest point.  Yesterday the market closed up $0.0241 to $1.6533/gal on September Heating Oil, down $0.0008 to $1.62/gal on September RBOB, and up $0.39 to $49.56/bbl on September WTI crude.

According to OPEC, July production rose by 173,000 bpd to a 2017-high of 32.87 million bpd. Which suggests that the market will remain in a surplus even with their attempts to cut supply.  Crude prices have backed off from the $50 psychological resistance level, falling just below to $49.28/bbl as we approach noon.