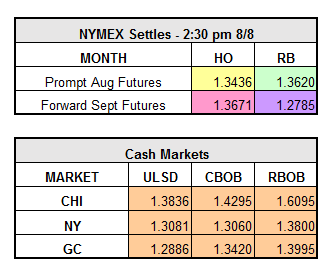 Talks between OPEC members to, once again, meet to discuss an oil production freeze influenced the market to move upward yesterday. Members of Ecuador, Kuwait, and Venezuela are pushing for coordination between OPEC and large non-OPEC members to manage oil production to the $50/bbl level. According to Qatar’s energy minister, an informal meeting is set to take place in Algeria from September 26-28.

U.S. Northeast gasoline prices are second cheapest in the nation (after Los Angeles CARBOB). Gasoline stockpiles for August are nearly 11% higher than the past 5-year average. Northeast CBOB continues to feel pressure from the gasoline glut, pushing below $1.33/gal, and now lower than Gulf Coast. Supply and production continues to outweigh demand, and in an effort to improve margins, 10%-15% production cuts have been made by many refiners. Further, October futures are trading about 8 cents lower in anticipation of the higher-RVP gasoline transition.

In other news, 83 oil tank trucks used by ISIS for crude transport have been devastated in a Syrian airstrike. Crude is a major source of funding for ISIS, so forces fighting against the group have been targeting oil in an attempt to cut its main source of revenue. ISIS has currently lost about 90 percent of its oil revenues, according to Iraqi News. Once smuggling over 50 oil tankers from Qayyarah and Najma, ISIS is now smuggling about 5 vehicles a day at $2,000 (which was once about $6,000).