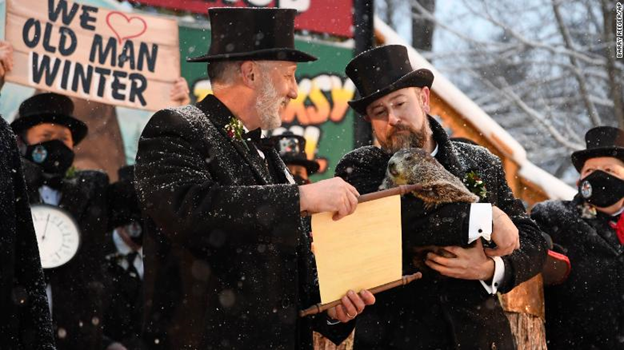 Every year millions of Americans turn their focus to the small town of Punxsutawney, PA as they anxiously await a groundhog’s bold weather prediction. That is right, Groundhog Day as it is known by many, takes place every year on February 2nd with the famous groundhog Punxsutawney Phil declaring whether there will be six more weeks of winter. The previous two years Phil has not seen his shadow, predicting an early spring. That pattern was interrupted this morning as the groundhog awoke at 7:30am and made his prediction there would be six more weeks of winter. “Now, when I turn to see, there’s a perfect shadow cast of me. Six more weeks of winter there will be,” one of Phil’s handlers announced on his behalf.

The tradition of Groundhog Day can be traced as far back as 1887, when Phil made his first prediction. According to the superstition, if a groundhog comes out of its hole on this day and sees its shadow, it gets scared and runs back into its burrow predicting six more weeks of winter. Totaling the 124 predictions that have been made since 1887, there have been 104 times Phil has seen his shadow vs only 20 times he did not. How accurate has Phil been throughout the years you might ask? According to Stormfax Almanac and Live Science Phil’s six-week predictions have been correct just 39% of the time. They go on to report that over the last ten years he has been 50% accurate nailing his predictions in 2011, 2013, 2014, 2016, and 2020.