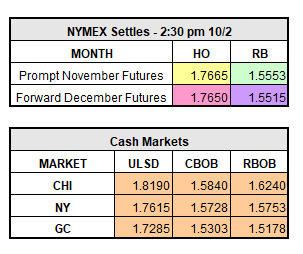 Crude prices are not expected to perform well in the last quarter of 2017, and are currently on pace to follow the trend that has held strong in multiple past fourth quarters in the U.S. This typically happens due to refinery maintenance and demand for refined products decrease because the summer driving season comes to an end.

It was reported that OPEC’s production in September was up 120,000 barrels per day from August at 32.83 million barrels a day. This week, OPEC and non-OPEC members are meeting at an energy forum in Moscow. The plan is to discuss global markets and how to monitor oil exports for the group. Alexander Novak, Russian Energy Minister said this meeting will not cover the topic of extending the deal. Stay tuned for rhetoric around this meeting, as well as the weekly inventory statistics out later today and tomorrow.

Aside from energy market news, the deadliest mass shooting in modern U.S. history took place in Las Vegas, Nevada on Sunday night. The shooting took place from the 32nd floor window of the Mandalay Bay hotel. The shooting has killed at least 59 people and more than 500 have been injured.   Prayers are with everyone involved.