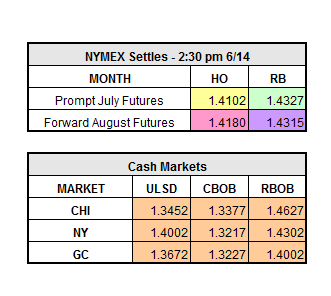 The market continued its downward motion early this morning, but currently is hovering around flat for both gas and heating oil. Yesterday the market closed down across the board, front month heating oil down $0.0375 to $1.4102/gal, front month RBOB down $0.0668 to $1.4327/gal, and WTI Crude down $1.73 to $44.73/bbl.  One of the reasons for the large losses on RBOB is weak gas demand, with supply vastly outweighing the decreasing demand.

Crude prices have fallen a total of 13 percent since OPEC made the decision to extend production cuts. Inventories are still at record highs in different parts of the world, leading analysts to believe that prices may continue to fall.  The United States is partly to blame for this, due to a 10% production increase over the past year to 9.33 million bpd. Currently, oil prices have hit six-week lows.  Although OPEC’s total production per day is only down .3 million barrels per day since October of 2016, the cartel plans to stick with the cuts at least until the end of the first quarter of next year.

Additional news worth nothing is that the United States Federal Reserve raised short-term interest rates by a quarter percentage point yesterday. The target range was raised from 1% to 1.25%, which is the 3rd consecutive quarterly increase.  A positive note about this increase is that it shows confidence in the United States economy and the job market is expected to rise in the future.

Currently the market is up slightly, July HO up 10 points and July RBOB up 12 points. Note that heating oil and RBOB are almost falling in line with each other, which is unusual for this time of year.