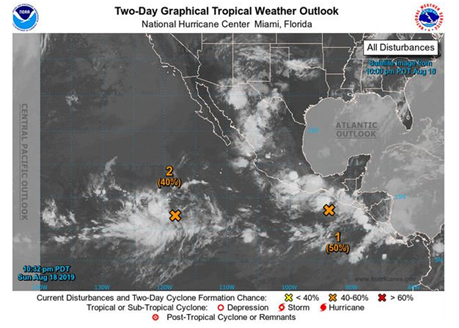 This hurricane season compares to a dull sporting event. The dreaded season for those along the Gulf Coast has been similar to a game where the hometown rival comes to town, expected to showcase some big plays and unleash some fireworks on the home team, but for unexpected reasons starts out flat. The rival shows sparks of momentum, but doesn’t execute or deliver the anticipated display to the home team.

The first half of the 2019 hurricane season has been surprisingly slow here in the US. Bringing only two named storms to the Atlantic so far. Storms Andrea and Barry thankfully brought little damage to those residing in the Gulf Coast this year.  The “Home Team,” as referred to above are contributing factors like Africa’s dry dusty air and an El Nino climate system for tackling potential storms of moisture and high wind shears.

That was the 1st half of the hurricane season, we’ve had our half time and now the 2nd half is set to begin with the rival team looking to unleash and crank up its high powered offense!

Last week, there were up to 17 named storms forecasted to develop in the Atlantic. To put in to comparison to 2018 there were 15 named storms in total, which included Florence and Michael combined to more than $49 billion in damages. Dan Kottlowski, the lead forecaster for AccuWeather says that they believe the 2019 season will be heavily back-loaded.

Could the significant change in direction cause a devastating blow or more to the Atlantic? The defense of Africa’s dry air and the El Nino climate are now gone. We could be buckling in to see an upset in the 2nd half of 2019.