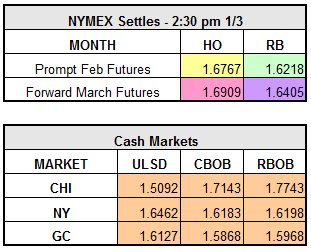 The oil market opened up 2017 by dropping more than two percent on the new year’s first day of trading yesterday.  Crude settled the session down $1.39 to close at $52.23 while both refined products, heating oil and RBOB, closed down approximately $0.05 to finish at $1.6767 and $1.6218, respectively.  Before the decline began, both WTI and Brent crude hit their highest points since mid-2015.  The early day spike was attributed to hopes of rebalancing global supply and demand as the recent agreement between OPEC and other exporters took effect on Sunday, January 1st.  As one energy analyst stated in summarizing the session, “It’s hard to justify a swing that big in a single day.  The strong dollar certainly played a part in the decline and so did WTI hitting $55 a barrel, which must have triggered a lot of profit taking.”

As we wait for the weekly American Petroleum Institute (API) data to be released later today, followed by the Energy Information Administration data tomorrow, prices are up over $0.01 on heating oil and RBOB this morning.  Early projections, as polled by Reuters, expect tomorrow’s report to show a draw on crude.  As is common for year-end accounting purposes, oil companies will draw down their inventories to avoid any tax implications that come along with those stockpiles.  In addition to the weekly data, OPEC and non-OPEC nations’ compliance with the November accord will be closely monitored as this, along with continued domestic growth in shale production will be the driving forces in the near-term.