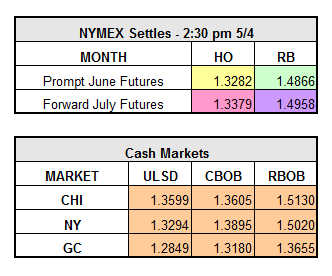 Currently, the market is rallying about 3.5 cents on both RBOB and HO amid news of a raging wildfire disrupting oil sands operations in Fort McMurray, Canada. It was uncertain yesterday at closing as to whether the fire actually harmed operations of oil sand producers or not; however this morning at least four companies stated their production has been affected. U.S. refiners and Cushing stocks may be impacted by the lower export volumes and pipeline flows that could result from the unplanned disruption.The region has been evacuated, and currently more than 1,600 structures have been destroyed by the blaze. 3.4 mbpd of the 4.5 mbpd of crude oil Canada produces is exported to the U.S., and about half of Canada’s crude oil comes from oil sands.

Summer gasoline prices seem to be a wildcard, with conflicting predictions by analysts regarding how the supply/demand picture will level out. The EIA showed gasoline demand up 187,000 bpd to 9.502 mbpd, and up 5.8% from last year over the past four weeks. Strong gasoline demand for 2016 is expected by many large producers, including Marathon, Valero, PBF Energy, and HollyFrontier. ExxonMobil even predicted demand to exceed capacity (could they be talking their book??). While some believe that 2016 demand could trump decade highs, May inventories are the highest on record and gasoline production is the highest since mid-February at 9.927 mpbd and increasing. Refineries are boosting output in anticipation of the expected demand.