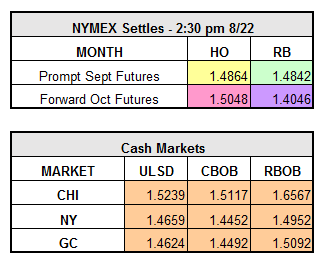 After seven days of consecutive gains, we finally saw some relief in the market yesterday as optimism regarding a possible OPEC production cut to support oil prices begins to dwindle. HO settled down $0.0332 to $1.4864, RBOB finished down $0.0287 to $1.4842, and September WTI crude lost $1.47 to $47.05, while October took over as the front-month contract, falling $1.70 to $47.41. We may have seen even greater losses if it weren’t for a weaker U.S. dollar adding some support to prices.

The big news driving the market, as of 10:50AM EST this morning, is that Iran is now indicating it might cooperate with OPEC efforts to freeze production output. Since their sanctions were lifted in January, the country has been boosting their output, but now that pre-sanction output has almost been met, Iran might be more willing to help OPEC. Iran will participate in the OPEC meeting in Algeria next month. Refined products are currently trading up $0.0200 for HO and $0.0100 for RBOB.

Tomorrow Iran is set to approve the Iranian Petroleum Contract (IPC), which will set the terms for new investment in the country’s oil industry, post-sanctions. This contract has been greatly anticipated by international oil companies (IOCs); with investing countries now joint ventures under the new contract, the IOCs will have a greater influence on the development of oil fields and might be given the opportunity to book the reserves. Also, new contracts under the IPC should last 25 years or more, while current contracts have a less enticing 5-10 year period.