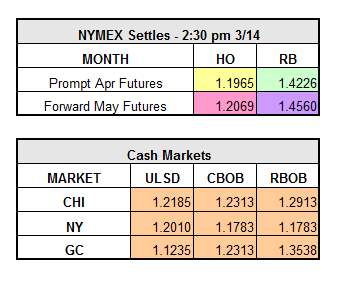 A combination of bearish signals is influencing trading today. The latest poll by Reuters indicated that U.S. crude stockpiles are expected to increase by 3.3 million bbls. Further, Iran has terminated hopes of a coordinated production freeze, stating Sunday that the Islamic Republic will only cooperate in production cuts once its own production levels hit pre-sanction levels of 4 million barrels a day. We are now told that the meeting to discuss production freezes will take place mid-April in Doha, although an exact date has not yet been decided. Production freeze talk is not enough to convince the market to move upward though, and with near full domestic storage, demand projections are too weak to sustain higher prices for long.

The Obama administration has rejected a plan to auction off certain drilling rights in the Atlantic Ocean waters off the coast of VA, NC, SC, GA, and FL. The American Petroleum Institute supported the plan to tap into new reserves, with benefits including job creation, U.S. energy security, domestic investment, and revenue to the government. Environmentalists, coastal residents, and the U.S. military opposed the plan, expressing concerns of climate change, oil spills, and coastal industrialization.