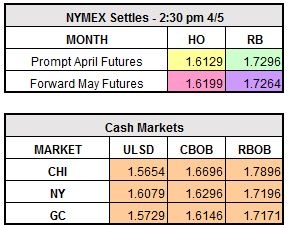 Oil markets went for a ride over the past 24 hours after President Trump authorized a missile strike at a Syrian airfield in retaliation to a gas attack earlier this week that Syria launched against its civilians. May WTI shot up $1.24/bbl last night on light liquidity after the news broke around 8pm EST. Oil markets typically have a knee-jerk reaction when it comes to unrest in the Middle East; we really haven’t seen any in quite some time. The market has since traded lower because no oil infrastructure is presently at risk. The March jobs report this morning also kept oil’s gains in check, as we added less jobs than expected. The U.S. economy added 98,000 jobs vs. the 180,000 expectation. This caused the stock market to trade lower, hindering crude’s gains.

On the physical side of the market, traders are concerned about tighter oil supplies coming out of Alberta, Canada. ConocoPhillips and Nexen are reducing crude production as a result of a fire in March at the Syncrude facility. ConocoPhillips is rumored to be cutting 140,000 barrels per day, while Nexen’s cut is unknown. Neither company has provided official comment. This comes amidst PADD 2 (Chicago) refinery turnaround season, meaning the Chicago market might be in store for some product tightness over the coming weeks.

Despite the fact that we have these two bullish factors to consider, WTI has failed to trade above $53/bbl. The recent strength in the dollar index could be playing a role in keeping crude below those highs we saw back in the first week of March. Let’s not forget, oil stocks at the largest storage facility in the U.S., Cushing, Oklahoma, still stand at record highs.