Even though February and March felt like spring here in the Northeast, it’s not until June that “summer gas” (aka low RVP gasoline) becomes a requirement at gas stations in some areas of western PA. Here’s a quick reminder on what RVP is and why it matters.

Reid Vapor Pressure, more commonly known as RVP, is the measure of gasoline volatility ; i.e.,  how easily it will change from liquid form into a vapor.  The higher the RVP, the more volatile the gasoline.

The U.S. Environmental Protection Agency (EPA) regulates the RVP of gasoline sold at retail locations from June 1 through September 15.  Due to higher temperatures during these summer months, gasoline is more likely to vaporize and cause an increase in emissions and ground-level ozone.

EPA began regulating RVP as part of the 1990 Clean Air Act.  As a result of the Act,            EPA set a volatility standard at 9.0 pounds per square inch (psi) for gasoline in ozone attainment areas and 7.8 psi for certain designated volatility nonattainment areas. Some states also received a waiver to set standards more stringent than the federal requirements, setting their RVP levels at 7.0 psi.   The EPA implemented its volatility standards in a 2 step process:  Phase I from 1989 through 1991 where gasoline RVP could not exceed 10.5 psi, 9.5 psi, or 9.0 psi, depending on the state and month. Phase II is from 1992 through current.

Under the Act, or due to a state opting for more stringent requirements, some areas are also part of a Reformulated Gasoline (RFG) area.  RFG is a blend of gasoline that has stricter limits on volatility and is most often a requirement in high-smog areas.  The RFG areas have set requirements throughout the year, rather than seasonally like RVP requirements.

The counties surrounding and including Pittsburgh are part of the 7.8 psi area.  A full list of low RVP areas can be found on the EPA website.

The EPA has a 1.0 psi waiver during low RVP season for certain gasoline alcohol blends, although numerous states either have standards that do not permit the waiver (including PA), have opted out, or have adopted the RFG standards. 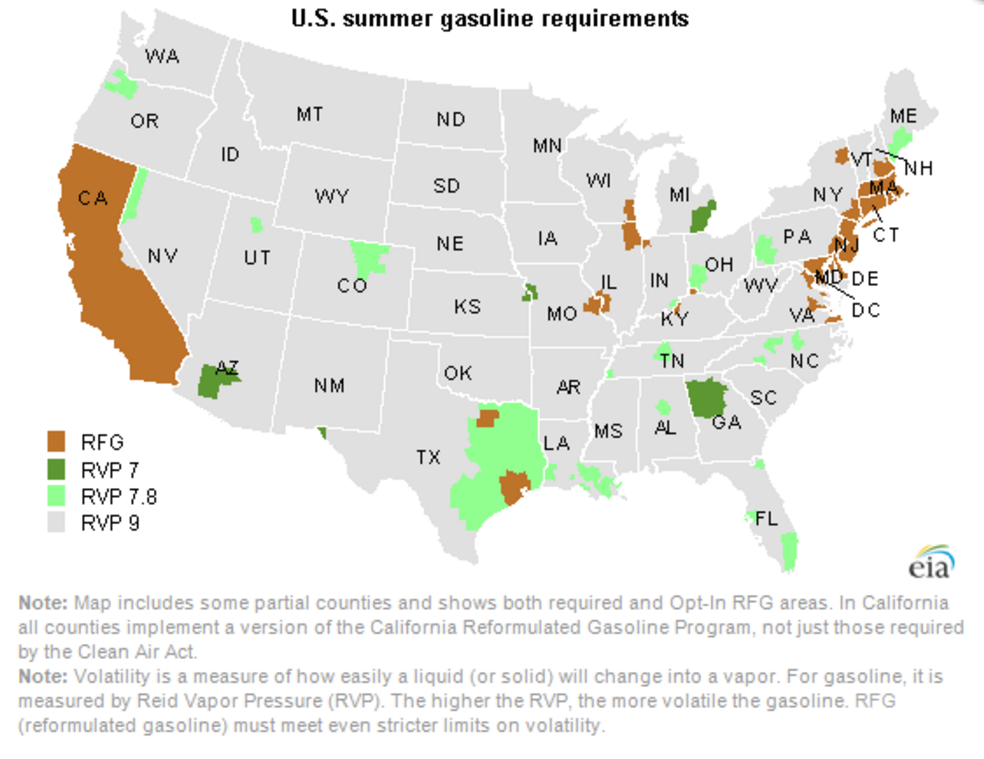 To meet the low RVP at the retail station level by June 1, the transition must begin months in advance.  Refineries begin producing low RVP gasoline in spring and all terminals must have these grades available by May 1.  From May 1 to June 1 all deliveries into the low RVP areas must be compliant with the more stringent requirements.  For retail locations that are not high volume or that do not have frequent tank turns, shipments of low RVP gasoline may need to begin sooner.

In recent years there has been discussion and speculation that low RVP gasoline will no longer be required since its environmental benefits may not be substantial enough to justify the higher cost.  As the RVP season is nearly upon us, it seems unlikely that we will see any changes during the 2017 summer season.