Oil prices continued to rise on Monday to a three month high with Brent closing up 5.5% to $40.84, breaking through the $40 per bbl mark.  WTI also closed up 5.5% to $37.79.  The primary driver for the rally appears to be a decline in U.S. shale production, which had been maintaining a consistent level between 9.1 and 9.2 million bpd in Q4 of 2015. Latest EIA statistics show shale production has dropped below 9.1 million bpd amid a continually shrinking rig count.  Another factor seems to be simply the lack of any negative news that would put downward pressure on prices.

According to Goldman Sachs this rally is premature and not sustainable because the market remains oversupplied. To effectively rebalance supply and demand, prices need to remain lower in order to meaningfully impact current supplies.  Goldman stated that “only a real physical deficit can create a sustainable rally which is still months away should the behavioral shifts created by the low prices in January and February remain in place.”

In other news, China, the world’s largest energy user, increased crude imports by 19% to a record high of 8.04 million bpd – on top of the 1.72 million bpd in January. The import trend can be seen in the graph, below.   Alternatively, exports had their second month of decline and dropped again in February.  The drop was 25.4%, the largest in 5 years. 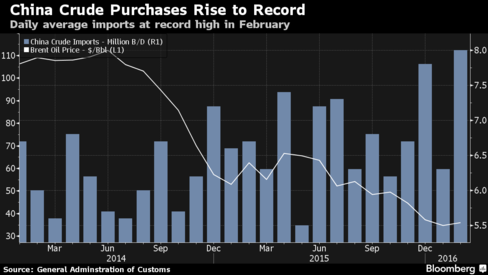 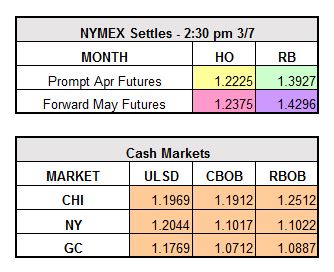