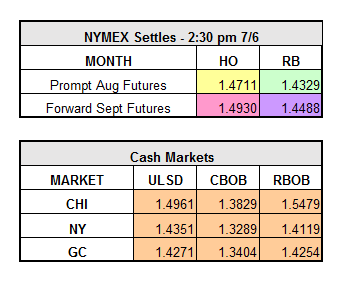 Yesterday, the market recovered from an initial 6 to 8 cent sell-off following the 4th of July weekend, settling up $0.0255 on HO and finishing at a $0.0042 gain on RBOB.  August WTI crude finished up 42 cents to $47.85. The market is currently trading down three cents for refined products on bearish EIA data.

Yesterday’s API report indicated a draw in gasoline stocks of 3.60 million bbls and a decline in distillate inventories of 2.305 million bbls last week. US Crude stockpiles reportedly fell more than expected, by 6.7 million bbls, with an 80,000 bpd build in Cushing.

However, the DOE statistics which were released this morning proved to be much less bullish than the API’s predicted. Gasoline only drew by a reported 1.22 million bbls, distillates drew 1.57 million bbls, and crude stocks fell 2.22 million bbls. Refinery utilization was down 0.5%.

In other news, the Niger Delta Avenger group have resumed with the militant attacks, claiming responsibility for a strike on remote manifold platforms operated by Chevron. This, along with a weaker U.S. dollar, contributed to bullish sentiment yesterday.

Libya’s state oil company is preparing to reopen two major export terminals, potentially restoring 600,000 bbls of crude export capacity per day. Political strife and militant attacks have kept oil output at about 350,000 bpd or less, about 75% less than production before the start of the 2011 revolution.