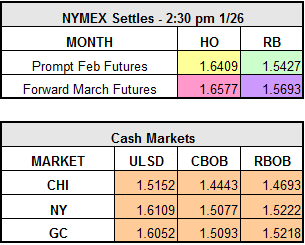 The recent give and take, back and forth oil market seems to be in a giving mood this morning after yesterday’s “taking” trading day.  The market closed up yesterday across the board with crude settling at $53.78 per barrel, up slightly over a dollar.  Heating Oil closed at $1.6409/bbl and RBOB finished the session at $1.5427/bbl which reflected gains of $0.0295 and $0.0189, respectively.  After a week that saw inventory builds domestically and some initial data regarding OPEC/non-OPEC production cuts, the market is looking for some firm direction.

This morning, the market began a decline after the release of some weak economic data which could negatively impact gasoline demand.  In addition, the focus remains on increased production in the United States.  Even with the OPEC/non-OPEC producers’ agreement to cut production by almost 1.8 million barrels per day in the first six months of 2017, questions remain with regard to how much of this will be offset by U.S. production.  The International Energy Agency is projecting total U.S. production to ramp up by 320,000 bpd this year to an average of 12.8 million bpd.  As one analyst from PVM Oil Associates stated, “The market is really torn between a relatively healthy compliance from OPEC and non-OPEC countries on the one side, and an increase in the U.S. crude production on the other.”  Later this afternoon, Baker Hughes will release its U.S. rig count data, which could put additional pressure on the market if the data supports further U.S. production.

Some news to watch for in the upcoming week will be additional information from the Trump administration on the executive orders recently signed to expedite environmental reviews of the Keystone XL and Dakota Access Pipelines, as well as the heightened trade rhetoric between the U.S. and other countries.

Currently, with the dollar up we are seeing pressure in the commodities markets.  As of late morning trading, all three indices are in the red, with diesel leading the way down over $0.0400 per barrel.