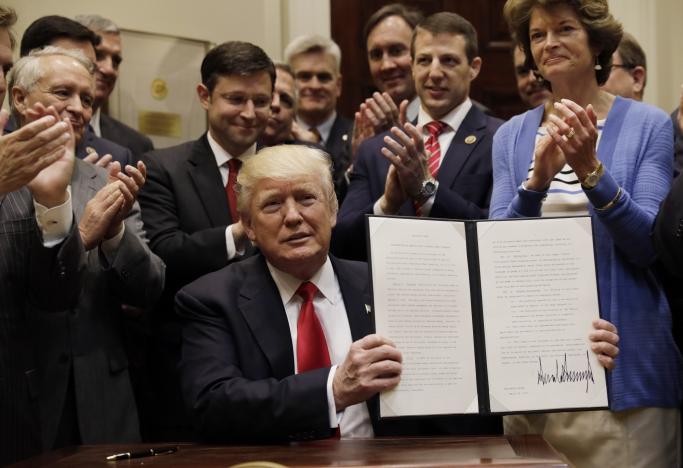 Just a short time before Obama left office he banned any new oil and gas drilling on roughly 115 million acres in the Arctic and 3.8 million acres in the Atlantic, from the Chesapeake Bay into the New England region. Friday afternoon President Trump signed an executive order to cultivate new offshore drilling within the Atlantic, Pacific and Arctic oceans.  “We’re opening it up…Today we’re unleashing American energy and clearing the way for thousands and thousands of high-paying American energy jobs,” said Trump. This order is meant to give a shot in the arm to domestic production and keep the U.S. on the path toward becoming less dependent on foreign oil.

Many industry officials clearly are on board with this new order but obviously the environmentalists are less than pleased. David Jenkins, president of Conservatives for Responsible Stewardship stated, “Why on earth would someone choose to push drilling in the riskiest and most expensive places on the planet when the current oil glut will make such ventures unprofitable for the foreseeable future?”  The people that are currently in agreement with this new order are looking at this as an investment for the future.  Reuters reported one anonymous official as saying that this new order is poised to help us start planning and shaping the future of new prospective areas, which will need time to develop.  One of the main groups opposing this order is the Democratic senators, who are declaring that it is going to be very harmful to the tourism and fishing industries within the new areas opened for exploration.  Expect legal ramifications to come into play and for this order to face even heavier resistance in the very near future.

Continuing to look at U.S. production, the oil and gas rig count levels went up yet again this past week. This marks 45 out of that past 49 weeks that the rig count has increased.  The oil rig count has risen by 9 new rigs this past week to 697 in total and the natural gas rig count has increased by 4 to 171.  As if OPEC’s job to rebalance the market couldn’t seem to get any more difficult, the U.S. is continuing to push forward regardless of recent price declines.  On top of that, two Libyan oil fields have resumed production and are expected to ramp up significantly.  OPEC cuts continue to hold with regards to the promises made and many believe that the market still needs more time to see global stockpiles diminish.  There are speculations that OPEC will extend cuts through the end of 2017 when it meets on May 25,but no one knows just what will happen at this meeting.  Stay Tuned.