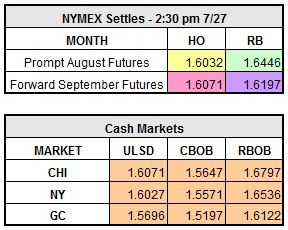 The market continued to rally Friday as all eyes are on Venezuela’s President Nicolas Maduro this week. Maduro’s possible attempt at a power grab of the government may result in foreign sanctions, which could drastically reduce the country’s oil exports.

WTI Crude trudged higher by $0.57 to $49.61/barrel on Friday as traders brace for geopolitical risk from Venezuela. President Maduro may proceed with an extremely unpopular election this weekend that could lead to writing a new constitution, resulting in an attempt at a power grab of the government and pave the way for a dictatorship. This would likely not only lead to severe riots and demonstrations, but also crippling economic sanctions by foreign countries which could prevent Venezuela from exporting much of its approximate 500,000 barrels per day of oil production. President Donald Trump essentially fired a shot across the bow yesterday as the administration sanctioned 13 senior Venezuelan officials. This is particularly troubling for the WTI market because much of the Venezuelan crude is exported to the U.S. Therefore, if President Maduro does indeed proceed with the vote and is successful in re-writing the constitution, look for crude oil prices to make another decisive leg higher, with prices already at two-month highs.

Reuters reports that U.S. shale producers have cut their 2017 capital expenditure budgets as lower crude oil prices are preventing further exploration. Anadarko Petroleum Corporation, ConocoPhillips, Whiting Petroleum Corporation, and Hess Corporation have cut a combined $750m of investment as a result of low oil prices. However, if the market continues to rally and surpasses the $50 mark, new investment may be on the horizon.