Yesterday, WTI crude closed up $0.88 to $53.90/bbl, RBOB closed up $0.0266 to $1.6528/gal, and HO finished up $0.0366 to $1.6994/gal.  No real news drove the market yesterday, just talk surrounding the OPEC/non-OPEC deal and traders waiting to see if participants hold to the agreement starting in the New Year.  The first OPEC/non-OPEC meeting for the monitoring committee is scheduled for January 13th.

With WTI crude right above $54/bbl, and a high of $54.29 today, crude is almost at the high for the year.  On December 12th, it reached the high of $54.51/bbl.  As the chart below shows, crude prices have gained 25% since November and further strength is expected with the market on the bullish side as of right now. Michael McCarthy, chief market strategist at Sydney’s CMC Markets stated, “There are mixed expectations of the cuts, trading is thin so the first two weeks of January would be critical to watch.  If there’s any misstep or any indication of disagreements to (the deal), we would see crude prices dropping.”

The API statistics are due out tonight, and DOE statistics tomorrow, both delayed a day because of the holiday on Monday. 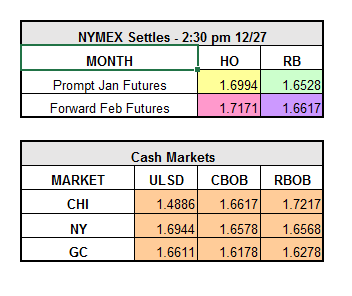 Angela manages daily price changes from suppliers to ensure Guttman Energy customers are getting the most current and competitive rack prices. She is also responsible for relaying supplier product allocations to Guttman Energy's sales and logistics team, as well as analyzing specific benchmarks such as OPIS, Platts, and Argus to ensure each customer is getting the greatest value from their contracted fuel purchases.