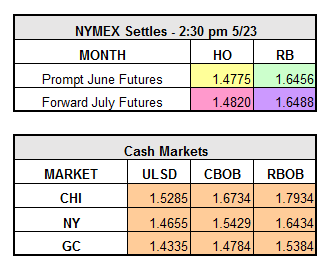 The market was indecisive this morning, teetering around flat on HO and RBOB as the physical fundamentals still seem to be conflicting with market sentiment in this well-supplied market. The future market is also contemplating on the return of output halted by disruptions such as the Canadian wildfires, political unrest, and vandalism/militant attacks in Nigeria. At about 8:30 this morning trading has rebounded, and is currently trading at about a cent and half over on HO and RBOB. Yesterday at the NYMEX settle, HO lost $0.0125 to $1.4775 and RBOB gained $0.0100 to $1.6456. WTI crude fell 33 cents to $47.75/bbl.

EIA stats will be released at 10:30AM tomorrow, and the preliminary Reuters poll indicates that the rumored consensus is an expected draw in crude inventories of 2.5 million bbls, including a significant drawdown in Cushing, OK caused by disruptions in exports from Canadian oil sands. A fall in gasoline and distillate inventories of 1.3 million bbls and 1 million bbls, respectively, is also expected. If draws are confirmed, we will likely see strong support in market (could we hit $50/bbl?). Typically crude inventory draws are paired with refined product inventory builds while refineries work harder, and vice versa.

To support bullish market claims, yesterday nearly 150 people were killed and at least 200 wounded in the most recent attacks by the Islamic State on Syria’s Mediterranean Coast. Union workers in France are on strike, protesting planned labor reforms, with standoffs at a number of ports, oil refineries and railways. Currently eight refineries in France are closed due to the escalation and output is falling by over half. Further, a major pipeline blast hit Nigeria’s Brass River crude oil stream, and about 21,000 bpd have been impacted.

On the bearish end, Canadian oil production is closer to being restored completely as evacuation orders in fire-affected areas are being lifted. Oil output has increased in Libya by 100,000 bpd, and in Iraq, which is up to 4.5 mbpd. Iran is ambitious to boost crude oil exports from 2 mbpd to 2.2 mbpd by mid-summer. 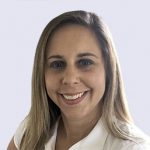